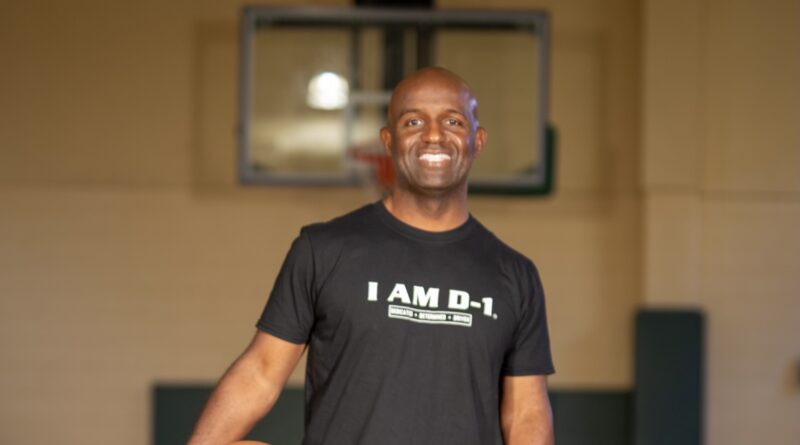 The following text is the opening chapter from Chris Meadows’ newly released book “I Am D-1: How to Conquer the World of Travel Basketball.”

Years ago, I relocated to Charlotte, North Carolina, in the beginning of the summer—high time for basketball. If you have never lived in a basketball hotbed like the Tar Heel state of North Carolina, believe me when I say you need to witness first hand the parental commitment and intense devotion to training to understand. It was basketball all day, every day, and there were plenty of players who could hoop!
Basketball was more than just a game—it was a lifestyle; the grind was real. I was in basketball heaven and it did not take long for me to get acclimated and entrenched within the local basketball community and jump into the travel basketball machine.

My first experience was on the boys’ side and it was serious. My initial meeting with a program director was at Waddle High School, a nationally elite-level travel program at the time. I walked into the gym and the intensity level, on a scale of one to ten, was a twelve. It was a full-program workout, so there were seventh through eleventh-grade players in the gym. Many of the top players in the city and state were all there, training in this workout. The bleachers were filled with parents, and most of the fathers stood on the baseline, watching intensely. This was not a place for any young player who lacked confidence. It was evident that everyone there knew they were in an environment that produced refined products, appealing to college coaches. Excellence wasn’t something to be strived for; it was demanded.

As I grew more familiar with the basketball community, I began to work more closely with players and programs, and eventually I started coaching. I worked heavily with players and families to develop long-term plans to help kids develop and refine their game. Many of the players and families I worked with were a part of that initial program meeting I attended. I would eventually begin to coach a high school varsity basketball team, as well. By this time, I was completely immersed in the local basketball culture and was training players throughout the Metro Charlotte area. This allowed me to establish relationships with many parents and players throughout the state.

The following year, I started coaching a younger travel team for a newly formed organization, and we rapidly
gained recognition as one of the top programs for college development not only in the state, but nationally as well. In the first year of the program, I coached a seventh-grade team that was packed with talented players. I made it a point to get to know all the parents personally, and one of the most important questions I would ask the parents and players was, “What is your long-term goal?” This was important to me because I was always determined to get the most out of every player, and the ultimate goal for me as a coach was to help each player earn a college scholarship. This question was also important because I didn’t want kids who were not “all in.” And, to be perfectly honest, I only wanted kids who internally wanted to play at the highest level. This allowed me to know if they were going to be committed and have the personal level of dedication I knew it would take to achieve next-level success.

I quickly realized that some of the kids I coached were still undecided if they wanted to play at the D-1 level, but the irony was that they competed as hard as everyone else. They were not as confident in themselves as the other players were, but I saw they had the potential to make it at the D-1 level, even if they didn’t see it in themselves. It became my job to help them realize the potential they had to excel as players who would eventually earn a Division 1 scholarship.
Something I realized early on, as I spoke with parents and players, was that they all had similar goals, but many of them did not know the first thing about how to make their dreams a reality. I felt as if I was watching someone who wanted to go to the beach for a vacation, but who did not have a precise map on how to get there.

Each player I spoke with wanted to play Division 1 basketball, and parents were doing everything they could to get their kids on the top teams within the city, regardless of whether or not that program afforded their child the opportunity to grow and develop as a player. Because of this, a good number of these kids did not receive the necessary opportunities to compete and gain the experience of playing in games, which would have allowed them to measure their progress as players. What I noticed was that not many parents placed a high value on developing their kid for long-term success; it was difficult for many to see past the present moment. Many parents were focused on who the top-rated players were at the time or what team won the state AAU title—things that had nothing to do with preparing their child for long-term success.

It seemed to me that every parent wanted to help his or her kid achieve a Division 1 scholarship, but the steps they were taking did not align with their goals. For example, many parents were emphatic about having their kids play on the teams with the best players, as early as fifth or sixth grade. They would compare their kids to other players of the same age without realizing all players develop and mature at different times/points. There wasn’t an emphasis on individualizing the skill development needed to fill in gaps to make every player complete. Bottom line: the overall vision to look beyond the present was not always a priority.

With that in mind, here are a few points to consider:

• Does playing on the top team in your area at an early
age really help your child if there is minimal development
(i.e., game experience) taking place?
• Is playing on a team that does not have many good
players at an early age important?
• Is there a point when a player should move to a more
competitive team or program if they are not playing with
a competitive team?

These are the questions every family should revisit each year of travel basketball, and the answers will vary for every family. However, there are a few key areas that should be addressed when making these decisions:

1. Is the current environment increasing my child’s competitive nature as a basketball player and athlete?
This is extremely important, and I list this at the top because, as we see with professional athletes, players continue to add skill to their games every new season, even at the highest level. This illustrates that developing skills will always be an ongoing process as long as you play the game. However, if you are superiorly skilled yet soft as a player, your skill set will never prevail in an upper-level competitive environment. Being challenged, playing hard, and competing at the highest level are prerequisites for anyone planning to play ball at the Division 1 level. These traits are intangibles, best acquired by immersing players into a competitive environment daily. Many college coaches now have these listed as skills they evaluate, right at the top of their recruiting bullet points. This does not mean that your program or team must be the team that has the best players at ten or eleven years old. You simply want to do your best to be in an environment that is challenging and competitive, and where the coaching and structure are planned with this in mind.

2. Does your current basketball environment incorporate real-time skill development with young players during workouts and practices?

When I say “real-time” skill development, I mean skills that are being taught from a fundamental perspective, especially in the early stages of basketball, which are immediately applicable in a game environment. For example, if a player is in sixth grade and is playing travel basketball, he or she should be able to:

• Jab step with either foot off catching a pass
• Pass the ball with either hand accurately off the dribble
• Finish at the rim off a full-speed transition play with
either hand
• Change directions with different crossover moves
effectively
• Be familiar with the concepts of team defense/shell drill
Some parents work on these skills with their kids away from practice. Building these skills at a young age is extremely important because, as with anything based on sustained growth and development over time, laying a solid foundation at the start will allow that structure to forever stand, regardless of the challenges and adversity it faces along the journey.

As players begin to compete in the arena of travel basketball at the high school level, the order of importance begins to shift, and it becomes exclusively about obtaining a scholarship. With this at the forefront of every player and parent’s mindset, the mission takes a turn toward the ultimate goal. When players are in elementary and middle school, it is important to find programs that will foster an environment of competitiveness and real-time skill development. This will help build the foundation needed to excel at that phase of development.

Once players reach high school, however, the focus shifts to being on a team or in a program that has credibility and nationally recognized program directors or coaches who have established relationships with college coaches. If you want to know why this is important at the high school travel basketball level, just go into any showcase event and you will see college coaches migrate to specific courts without knowing any of the players. They will be drawn to specific courts because they know that program’s reputation and history for producing players who excel at the college level. Many college coaches will also have history with a particular program’s director or coach. Association with a reputable development program is meaningful because it says several things to a college coaching staff about players, such as:

“Playing for a credible travel program often helps the player in areas that cannot be measured by minutes.”
It is always good to win trophies and championships, especially when it is the result of hard work and dedication; however, winning trophies at the expense of building the proper foundation at an early age can be costly in the end. The ultimate goal is to obtain SCHOLARSHIPS, not TROPHIES.

Chris Meadows is the Author of the book, “I AM D-1” a # 1 New Release. A native of Phoenix, Arizona, He played college basketball at St. Bonaventure University. Chris was the founder of the renowned, “Momentum Skills Academy” in Concord, NC and has been instrumental in developing several top national travel programs on both the boys and girls circuit. Currently serves as an advisor to many of the future college players. The book is available at: www.IAMD1THEBOOK.com, Amazon and Barnes & Noble.