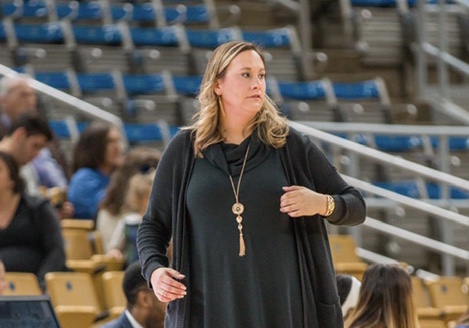 I’ve been receiving calls from fellow coaches asking ‘How y’all doing?’ It’s a simple question, but the answer is complicated.

Do I tell them all that? Because honestly, it seems like nobody knows.

Given all that is taking place in our country, I feel like Lake Charles, Louisiana has been ignored. It was merely a minor blip on the national news when the hurricanes swept through.

If people could only see the devastation, they may understand how badly everyone in Lake Charles is hurting and will be hurting for a long time.

Hurricane Laura wrecked our community as a Category 4 storm in late August with winds up to 140 mph. The majority of businesses, homes and buildings were damaged and some absolutely destroyed.

If you go to Lake Charles, it’s almost like a war movie. I cry every time I drive through just knowing the road ahead of us is going to be long.

We have National Guard and Army trucks parked in the McNeese State parking lots. There are trailers and RV campers that people are living in while their homes are fixed.

It’s hard to do it justice. We are still in shock it happened, and I think we are all just trying to survive and do what we got to do to rebuild.

We have no internet and no cable. We barely have restaurants open. Some are cash only due to the fact people don’t have internet access.

Our basketball arena at McNeese State has taken a major hit, just like nearly all the athletic facilities on campus. We will not be able to play in it this season due to the damages. Our roof came off and we have mold in our offices. The water is nearly two-feet deep on the courts.

Our kids were all home safe with their families during Laura, and we had to move quickly to try and get them back together again so we could begin training.

Our team has relocated to Baton Rouge and we are living on the campus of LSU, which we are very thankful for. We are all staying in apartments here and using high school gyms and a couple of local colleges to practice. We are thankful to have this opportunity, but it’s not been easy.

We brought our entire staff with us, including athletic trainers, our strength coach and managers. It’s been an adventure, but we are thankful because so many schools and coaches and churches and other people have donated items for us to try and help give the kids the supplies they need to be successful while we are here.

The big thing about this relocation is it gives the kids hope that we will play this season and that we are going to be a light for our Lake Charles community.

I can’t say enough about how well our players have handled this.

The first Zoom call we had after the hurricane was to make sure everyone was safe, and all they could talk about was wanting to get back together again as a team and play ball. They are so grateful they have been allowed to do that. Their families are fully supportive of them being in Baton Rouge, even with the coronavirus pandemic and going through that as well. I tested positive for Covid this month, and just finished my quarantine period. I mean, what else can be thrown at our program right now?

But these kids have done everything we have asked and never once complained because they want to play this season. I told them that out of this whole thing, the biggest highlight is going to be their story. It will be one they will remember forever, and the bond they will have with their teammates through this will never break.

Our administrators and local officials have done a fantastic job promoting Lake Charles and doing the best they can to tell people how much the community needs help and will still need help for many more months.

So when someone calls and asks, ‘How y’all doing?’ it’s hard not to respond with: ‘Where do I even start?’

Kacie Cryer is in her fifth season as the head women’s basketball coach at McNeese State. The Louisiana native began her coaching career with the Cowgirls in 2008 as a graduate assistant. She then served as an assistant at McNeese from 2011-2016. Coach Cryer played as a collegian at LSU-Shreveport from 2004-2008.

As told to Rhiannon Potkey