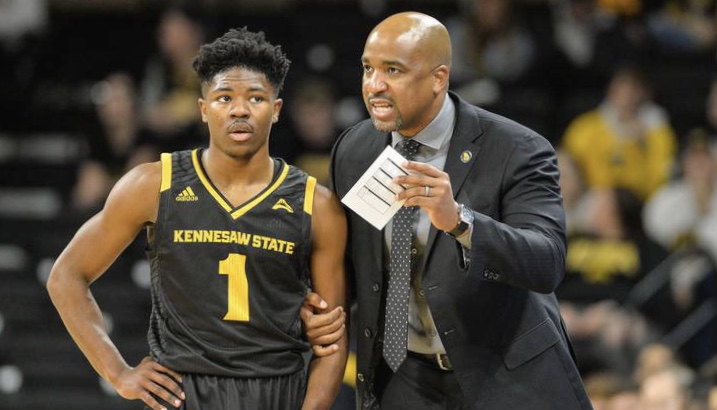 As I sit here reflecting on my first season as a head coach, there were a ton of positives even though we ended up winning only one game. If not for the for the self-confidence and perseverance my parents instilled in my siblings and I at a young age it would have rattled me pretty good. Now, I would be lying if I said it wasn’t uncomfortable, but I have chosen to embrace only winning one game because I know being uncomfortable is where growth is. My purpose for sharing is not only to talk about the season but to share the entire process that led up to my first year as a head coach. I don’t want to lose this feeling without sharing it and hopefully helping someoneelse.

Assistant coaches that are taking the steps to become head coaches, be good where you are. BE WHERE YOUR FEET ARE! Be locked into making the program where you are the best it can be. Be ELITE for your head coach and your student-athletes, because ultimately that is what it’s about. You have to make sure your heart is in the right place, because you are basically one step away from an AD giving you your opportunity. I promise you that you are going to expect the same energy from your assistants as a head coach that you gave as an assistant.

This season was unbelievably fun. The challenge to wake up every day with the opportunity to impact young lives and be the example of what a leader should look like is indescribable. There were many lessons I learned and continue to learn throughout this process that made me a better coach, leader, husband, and father.

For you assistant coaches that aspire to be a Head Coach one day, the best piece of advice I can give you after growing through my first season is “expect the unexpected but control what you can control.” That was my year in a nutshell. It’s great to have your first 90 days mapped out to help you stay organized, but the truth of the matter is they won’t go as you plan.

As an assistant coach, you are only touching certain aspects of the program, whereas as a head coach you are touching all of them. As an assistant in some sense, you are sheltered from certain topics and problems that arise. As an assistant I tried to know what my head coach needed, mainly to help make his job easier but to also know what to expect once I moved over a seat. Here’s a little secret, I thought I knew but realized quickly that I had no idea what would come across my desk. Nothing can prepare you for that first year, you have to go through it and grow through it.

I have been fortunate to have coaches I’ve respected from a far share insight with me and even more fortunate to work for some great Head Coaches. One piece of advice that has always stuck with me is something University of Texas Head Coach Shaka Smart shared with me, “don’t just want to be a Head Coach, want to be a successful Head Coach.” That alone changed how I approached being an assistant every day after that.

As an assistant coach, you need to start writing down the following: what you want your program to look like, what you want your program to embody when you become a head coach, what your standards academically will be, what your staff and each of their roles will look like. That is something I did during and at the end each year throughout my 13-year journey before becoming a head coach. I wrote down what I wanted my program to look likebut it changed over the years as I grew as a coach, as a leader, and as I worked for different Head Coaches with different philosophies. You are going to take ideas from each of the head coaches you work for but never forget to be YOU when preparing and moving one seat over.

I was fortunate enough to interview three times at three VERY different institutions from an identity standpoint. The things I learned through each interview really prepared me for my interview at Kennesaw State. I learned that you have to approach the interviews as an educator. Remember this, some of the best educators are the best learners. You should be eager to learn what the vision of both the AD and President of that institution look like. Then you should educate both the AD and President on what a championship program will look like at their institution. From Academics to Player Development, from Community to Fundraising, it all matters. Talk in WE and US because it is going to take everyone to create that championship program. Lastly, do something subtle to separate yourself from the other candidates. One thing I did at every interview was leave behind a copy of John Gordon’s “The Energy Bus” with a note thanking them for their time and what this book meant to me. For you it may not be a book but find something subtle that will help them remember you once you leave. Now, once you have that job get ready to FIGHT!

The culture of your program is something you fight for every day. Even when you think it’s where you want it to be, if you pull back or start to focus on something else, you can lose that culture fast. There were two or three times during our season when I thought we were right there, ready to turn the corner in a positive direction. Then something would come up where I had to make a decision to fight for our culture or ignore our culture. I chose to make our culture an everyday priority.

As I mentioned before I’ve been fortunate to work for some great head coaches. During my one season at the University of Georgia one of the many lessons I learned from Coach Crean, is that culture can’t just be on the court. There can’t be a difference in the sense of urgency, intensity, or attention detail from the court to the classroom, classroom to the weight room, weight room to tutoring sessions. The individuals that you entrust to supervise those areas have to embody your vision of culture and FIGHT for that culture every day. You can’t waiver on accountability, that is the quickest way to lose credibility as the leader of your program and culture.

THE TRUST (THE MOST IMPORTANT & CHALLENGING)

You are going to work five times harder in the area of TRUST than anything else as a head coach, in my opinion. I believe we worked really hard at the relationship part and trying to build that trust. But you are basically asking young men who are 18 to 22 years old who have had their world flipped upside down to trust you. The person who recruited them, who they came to play for is no longer there and that is hard thing for them to wrap their heads around.

I was fortunate that I inherited a group that was hungry for something new and they wanted more structure. Now, helping them understand that when you want something different there has to be a day in, day out commitment of not accepting anything but the best from themselves was more challenging than any game we’d play or adjustment I would make all season. A good friend of mine Marc Proto who is the Director of Sports Performance at the College of Charleston would always say, “everyone wants to be a beast until they have to do the things necessary to become a beast.” You have to be able to understand thatand be able to work through that to create REAL change.Trust me, you will say “How don’t they understand _________” a million times. That question doesn’t matter—work your face off to help them understand. Through the ups and downs make sure you continue to TRUST yourself and your vision.

We had a winning season this year. Building a successful program starts not only with the leadership of the head coach but it also starts with who you decide to hire. Hiring the staff I hired was the first win our program had. When I looked at and talked to each one of my assistant coaches, it wasn’t about if I could win with them, everyone is great when things are going well.  I knew in my heart that I could lose with them. I knew regardless of the outcome they were going to come in the next day with great energy and a hunger to impact our team. I knew they were going have an expectation for themselves that matched what my expectation would be, and most importantly they would tell me the TRUTH.

My assistant coaches preached our message to our team every day which is why our guys could see we were making strides as a program. Even though the wins didn’t come, I think they started to see the respect that other teams had for them and how hard they played. They didn’t quit. To our teams credit, from the first day we stepped on the court to the last practice of the season, they came in every day and had good effort. That is hard to do when you are sitting at 1 and whatever by the end of January. That in my opinion was our BIGGEST win of the year. We won because the expectation to come in and compete every day had been established.

In closing, choose what wins look like to you because they may not always come on the court. Your belief in your vision is what will keep you positive when you go through the valleys of your first season. Some may look at 1-28 and say… you can’t coach or you didn’t do a very good job. I wasn’t worried about my record as a head coach. I promise you. I was more concerned with establishing a culture and identity for our program, because when we are climbing the ladder to chop down the nets, and going dancing I will remember the growth and toughness that came from my first season going WON and 28.

EDITORS NOTE
Amir Abdur-Rahim was named the head Basketball Coach at Kennesaw State University in April of 2019. He began is coaching career at Murray State from 2006-2011 under Billy Kennedy. He followed that with stints at Georgia Tech, College of Charleston, Texas A&M and University of Georgia.