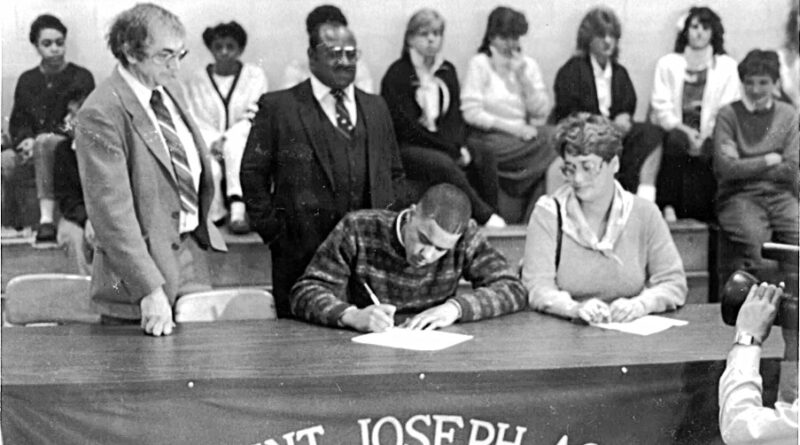 One of the complaints levied against younger generations is that they tend to have developed a sense of entitlement, that they don’t have an adequate appreciation for the dignity of hard work. Is this true? There certainly may be some truth to this but like most broad sweeping statements of this kind, it’s a generalization and a generally lazy narrative. Kids are no different than we were as kids in my opinion. But as they assimilate into today’s world they develop a perspective that is shaped by a much different experience than ours. At their core, they aren’t wired differently. They want the same things for the most part. I got serious about basketball when I was 8 years old. Since that time I had the goal of playing Division 1 college basketball. The friends that I chose to spend most of my time around shared this goal of one day playing “D1”. It was a constant refrain…”I’m trying to go D1”.

Back in the 80s, when someone was a legit division 1 prospect the big thing was getting mail. The more mail you received from schools the better. It was especially a cool thing to have enough mail to fill up a shoe box with all of your “letters”. The best prospects would have boxes upon boxes. If there was an article written about a highly coveted prospect they’d often times show a picture of him surrounded by all of his mail from the various schools. As an aspiring D1 prospect you couldn’t wait to begin receiving those letters and when you finally did, you certainly weren’t going to keep that a secret. When I finally became a prospect myself, I loved receiving letters from schools. Getting home and seeing those envelopes with the college logos gave me a real jolt of confidence and reassurance that my goal of being a division 1 player was becoming a reality. I felt important.

I was a fairly humble kid but I was definitely going to let my peers know that I had received a letter from Duquesne or Rhode Island or Richmond or Fairfield on a given day. When the scholarship offer was actually made, I couldn’t wait to let people know and if they would have printed it in the local newspaper I would not have objected to that at all. Back then, if you had a good game in high school, you couldn’t wait until the next day to pick up the newspaper to see what the article had to say about your performance. Plus, if you played really well, there was also the chance that your picture could be in the paper! Seeing your name in the box score is cool enough and having your performance be detailed in the article was even better but having you picture too? I mean, we kept scrap books! That was a huge thing, to collect all of these articles, pics of your performances and accolades to celebrate your journey and accomplishments. A scrap book! Maybe some proud mothers still do it for their child today but back then you were cutting those out yourself.

What if that same young man from the 1980s could have, not only seen his picture in the paper, but he could have seen highlights of his performances on a platform that is way bigger than his local newspaper? There’s exceptions, I’m sure, but I believe most us would love to see clips from our old games in high definition from back then with LL Cool J playing “I’m Bad” over your highlights. So today, when I see a young person post on their social media page that they are “Blessed to receive an offer from (insert college)” I am careful not to judge them. Is it over done? And are there tons of cases where the offer is a frivolous gesture from a school? Yes. In those cases I have more of a problem with the school than the prospect but I still take it for what it is. Social media is driven by vanity. We all tend to place too much value in our own images, our possessions or our opinions. So much so that people have become billionaires by creating platforms that exploit our vanity.

Me judging a kid for being proud of a scholarship offer is no better than him bragging about the offer. Doesn’t this display of pride suggest that they are not entitled? In the instances where the offer is real, that is a huge accomplishment for any young person. They’ve earned a free education and an opportunity to play the sport that they have dedicated at least some level of hard work to. Can it be overdone? Can they get a little too caught up in the number of offers and be missing some perspective? Sure, but I do believe there’s plenty of other behaviors young people could indulge in that is a lot more undesirable than this. So I say…let it go. If young people want the world to know they received boxes of letters or a D1 scholarship offer, let them have that space. If they have the grades and they’ve put in the work…let it go. Those small moments of vanity aren’t much different than the way we felt. They just have more of a platform to display that harmless immaturity than we had.

Rob Lanier is currently the Head Coach at Georgia State University. Prior to Georgia State he spent the previous 4 years at The University of Tennessee under Rick Barnes. Rob finished his playing career at St Bonaventure University in 1990 and began his career in coaching under Jack Armstrong at Niagara University that summer. In 1992 he moved on to his alma mater under Jim Baron for 5 seasons followed by stints at Rutgers and Texas before being named head coach at Siena College in 2001 where he led the Saints to two postseason appearances (2002 NCAA & 2003 NIT). After Siena Rob worked at Virginia under Dave Leitao  (2005-07) and under Billy Donovan (2007-2011) before reuniting with Barnes at Texas in 2011.