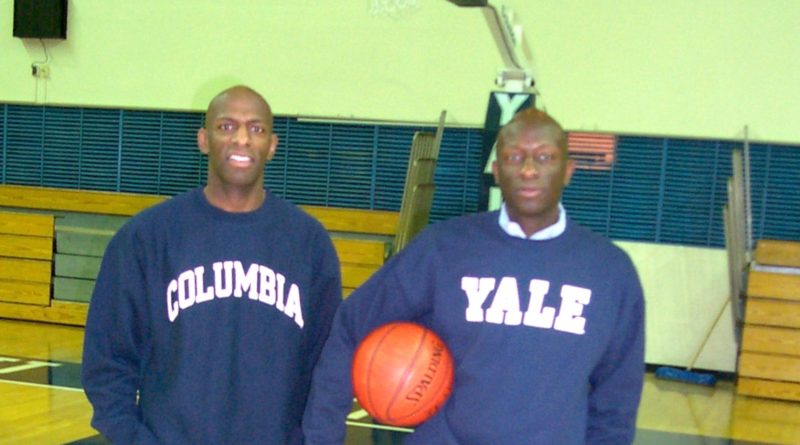 I get the question all the time: “Man, how did two of you become head coaches from the same family”? Honestly it was a ton of luck and fate. Our passion for the game was always there and like most brothers we prided ourselves on beating the brakes off each other in everything we played.
He always got good grades, it took me until High School to become a real student. I had more success as an athlete in our younger years but as he got stronger he began to dominate me which made me try that much harder. I credit a lot of my competitiveness from those battles in the backyard when I lived and died on every shot.
It was a daily competition with everything. He would get his boy and I would get mine and it would be on. Going at it as hard as we could. Nothing satisfied me more than the times my team would win…Or when my LA Lakers would beat his Sixers in the NBA.

The only time we played together was in high school, my junior year. Me as the point guard and James as our shooting guard. We weren’t very fond of each other and that would be putting it mildly. It only escalated when we played together.

I don’t remember how or why but we went after each other during practice and had to be separated.
I wanted to win but I always wanted to be better than him.

He went onto SUNY Albany after high school and it was during our time apart when we became best friends. All of a sudden I loved having him home and would pick his brain about college and for the first time ever we hung out socially.

I attended college in upstate NY as well, Oswego State. The two teams were in the same league but different divisions. We never played Albany and I am thankful for that.

Upon graduation James started working at a company called NCR and, like everything he touched, he did very well. I stayed up at school for an additional two years to obtain a Masters Degree in Counseling.
Two years later our lives and careers would come together. I worked as a school counselor on Long Island and also was the middle school BBall coach. As much as I loved my days as a counselor, the coaching is what I enjoyed the most.
James was having a ton of success at NCR and on weekends he would come work with my team. My players loved him but more importantly he enjoyed being around them. It was a great break from the pressures of his real job. I remember him attending my first game I ever coached. We were up 20 in the 2nd half so they fullcourt pressed us. We weren’t prepared for pressure and we ended up losing. My brother blamed my point guard but I had to take the responsibility for not having my team prepared.

After that season and James coming in on Saturdays to work with my team, he told me he was quitting his job and was going back to Albany to coach. I thought he was crazy as he was doing so well in his job.

A year later he asked me to get him into Villanova overnight team camp and there he coached our Varsity players. You could see his confidence and passion. He was already a very good coach.

I was fortunate to move up the ranks going from middle school to JV and finally Varsity coach.

James stayed at Albany for 4 years coaching JV and recruiting for the Varsity team.

He then got his big break and became an Assistant at Yale.

I had some great mentors and Frank Romeo was one of them. Frank introduced me to the Villanova family and Jay Wright. Jay ended up hiring me in 1994 when he became head coach at Hofstra.

James coached for 2 years at Yale as an assistant before getting another assistant job at Ohio University.

After working for Jay at Hofstra I got a huge break by getting an assistant job at Villanova for Steve Lappas.

James would eventually interview for the Yale head job when it opened after his 2 years at Ohio U and the rest has been history as he has done a remarkable job.
After working at Villanova for 6 years I felt like it was my turn to move over a couple of seats and I became the head coach at Columbia which just so happens to be in the same league with Yale.

Not thinking about what the recruiting battles or games would be like I went full steam ahead in hopes of turning Columbia into a Ivy League contender.

The next 7 years competing against each other for potential players and games brought back memories of being in our backyard but instead of fist fights and arguments you actually felt for your brother. It was a great experience for our family and friends as those Columbia – Yale games became ultra intense. I would be lying if I didn’t tell you that my blood got boiling a little more when the Bulldogs were up on the schedule.

After several years of going head to head we both agreed that the experience was getting tougher and tougher to go through. We were always able to keep the game in perspective but it was difficult to handle afterwards when either of us had success .

I left Columbia in 2010 and became Steve Donahue’s assistant at Boston College and James’ Yale teams continued to improve.

After one season at BC, I was fortunate enough to become the head coach at Boston University and now head into my 7th season.

James and I talk and text daily. It’s been a great journey as a coach especially going through this with your best friend. We scrimmage each year but that is it and trust me that’s enough!

It’s kind of indescribable to be doing this with your brother. I watch many of his games and always have a keen eye on how he is doing. It’s great to pick his brain and get advice on how he would handle certain situations.

I think we both know how fortunate we have been, especially to do this together. It’s been a family thrill and a experience we both treasure .

EDITOR’S NOTE
Joe Jones is in his 14th season as a Division 1 Head coach. He previously spent 7 seasons as the head coach at Columbia University. Currently, this is his 7th season at Boston University, Joe holds an overall record of 107-86 (.554) with a 63-29 record (.673) in conference play. On five occasions Coach Jones has led BU to top 3 finishes in conference play and in 2014 earned a Patriot league Regular Season title along with a trip to the NIT. You can follow Joe on twitter: @BUCoachJones. James Jones was named Head Coach at Yale in April of 1999 and has had a long and successful run culminating in a trip to the 2016 NCAA Tournament. He has been named Ivy League Coach of the Year on 2 occasions and has led Yale to 4 post season appearances and an Ivy League Championship in 2016. You can follow Coach James Jones on twitter @JamesJones_Yale

One thought on “BROTHERS BOND by Joe Jones”