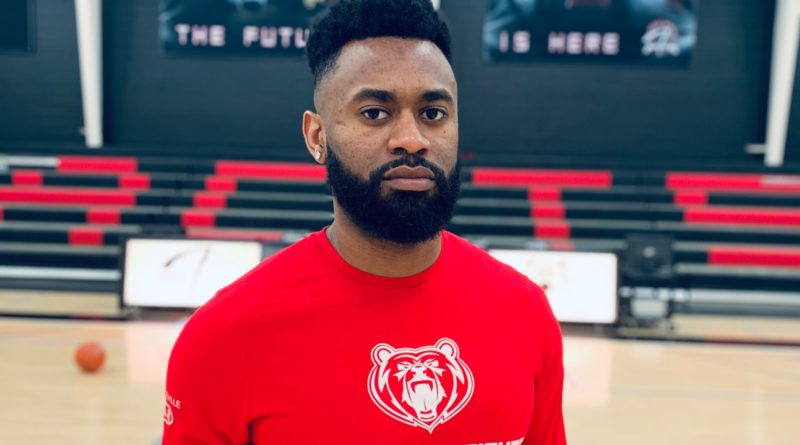 I must begin by saying that, without the presence of my Lord and Savior, Jesus Christ, and my heavenly father, God, this incomplete journey that I’m letting you in on wouldn’t be possible.

Summer 2016, late July, I stood at half court watching my Los Angeles Rockfish AAU team (founded and run by longtime AAU pioneer and legend, Dave Benezra) warm-up, in preparation for a game against a competitive Bay Area team. My attention also on the numerous college coaches flooding into the gym as they lined themselves up around the baseline and sideline, in order to evaluate the talent that was going to be on display. At this point in my life, I was out of school, with no degree, and working as a server at Red Lobster. From a very early age, I always knew when I was done playing basketball that I wanted to be a coach. I knew that I had to be around the game in some capacity.  Literally, after 30 seconds of watching the college coaches, I said to myself, “I can do this!” That moment alone changed the trajectory of my life.

With a new sense of purpose and determination, I began the first steps toward completing my education. I like to refer to this chapter of my journey as “finishing what I started”. I began classes at CSULA in the fall of 2016, while continuing to work at Red Lobster. During this time I even continued coaching for Rockfish and volunteering with my high school basketball program.

Being blessed with a flexible and understanding boss at Red Lobster, I was able to find balance in managing a five course semester and even began to think about what my next steps would be. The prospect of becoming a graduate assistant (manager) at the University of Washington, under Coach Lorenzo Romar, introduced itself. If I wanted this opportunity, I needed to graduate by the spring of 2017. Upon review of the graduate enrollment checklist and an assessment of my current transcripts, I found that I would need to complete 8 classes that spring. Having taken three years off from school, I knew this would be a challenge. Right away, the time that I once had to spend with my family, friends, and loved ones, went out the window. Work and school became my only past times, and even work was limited, but sacrifices had to be made.

I’m sure I’m not the first to say it, but conquering eight courses in one semester, especially the last semester was no easy feat! The final weeks of the semester brought about stress, moments of questioning myself, and countless thoughts of “what have I gotten myself into?!”

On the 21st  day of May, 2017, I graduated with my bachelor’s degree from California State University, Los Angeles.  That allowed me to then accept the graduate assistant position at the University of Washington, but for the new head coach, Mike Hopkins and his staff.  That staff included former head coaches Cameron Dollar and Dave Rice, Jerry Hobbie, and a rising star in the business in Will Conroy. I packed my car up and hit the road to Seattle on June 13th, and arrived there on the 15th.  I was starting my graduate program just four weeks after graduating with my bachelors. Through utilizing my network, I was able to stay in the city of Tacoma, which is a good 50 minutes to an hour from campus, at a distant friend’s, who graciously allowed me to “house sit.” If you’ve ever lived in Seattle, you know that the drive on the I-5 can be a bit crazy at times.  Coach Hop wanted the staff at the weight room at 7:30 every morning, to support the freshman. My class started at either 8:30 or 9, depending on the week, but I was at the weight room by 7:20. Sacrifices had to be made.

We went 21-13, beating highly ranked Kansas and Arizona along the way, finished 7th in the Pac-12, and Coach Hop won Pac-12 Coach of the Year in his first year at the helm (which he said was OUR award). He showed me what it was like to take a program, put your imprint on it,  and change the culture. We had a great first year at Washington, which was my only year. My graduate program was a 12 month program and I graduated on June 23rd with a Masters of Education, in Intercollegiate Athletic Leadership. I don’t think there’s another coaching staff in the country that has two former head coaches as assistants. As much as I learned from Coach Hop, how a head coach conducts himself and thinks, I was able to learn the same things from Coach Dollar and Coach Rice. I would have loved another year to be under them and learn, but they did an amazing job of giving me everything that they could. To this day, they treat me like family, and it humbles me every time I think of it. Coach Hop always says, “It’s about the people.”
I went to the 2018 Final Four that was held in San Antonio, and when I returned back to Seattle, I was afraid.  Afraid for my future, not knowing what was next for me, wondering, “what do I do now?” I even thought that I should’ve got into a program that allowed me to be at Washington longer than one year.  I contemplated being a GA again for another program, or maybe volunteering for another program. I prayed, talked with my friends and family, to help get me through what I felt to be a difficult time.  I went to Coach Hop’s office, hoping to steal just 10 minutes of his time. Coach Hop, being the guy that he is, gave me an hour! He asked me what did I want to gain out of all of this and I told him, “I want to be sitting in your chair one day”, and he follows with, “Well, if you want to sit in my chair, this is what I think you should do…”  I then understood that if I wanted to affect student-athletes in the positive manner that I wanted to and saw for myself, that more sacrifices had to be made.

The following week, on a Tuesday, I was walking to the basketball offices, when I took my phone out of my pocket and noticed that I had missed a call from Coach Hop. I immediately called him back after walking 4 more steps and noticing that he wasn’t in his office. He answered on the first ring.  He shared with me that somebody had called him, inquiring about me for a job. The job was in Toronto, Canada, at a prep school. This next step in my life would arguably be the most uncomfortable move I’ve made in my life to date. Los Angeles is where I was born and raised, where we have great weather and palm trees. During my time at Washington, we played Providence and Virginia Tech at Madison Square Garden in New York, and it was my first time on the east coast ever.

I know for a fact, if it wasn’t for me and Coach Hop’s conversation a week prior, I probably would’ve thought that I was working backwards by considering taking this type of job. This job was exactly the kind of job that he advised me to take.  If I accepted the job offer, I would be working for somebody, and I could tell in Hop’s excitement, that he really trusted. Tony McIntyre, was calling my boss, looking to hire me. He has coached the likes of Anthony Bennett, Andrew Wiggins, Jamal Murray, Thon Maker, Dillon Brooks, and his two professional sons, Dylan and Tyler Ennis. I sat on it for about three weeks, and decided before a visit to the school, to accept the job.  Coach Hop had coached Tyler Ennis at Syracuse, and Coach Rice had coached Anthony Bennett, and after talking to both of them in depth, I felt very confident in going to work for Tony. I would now be further away from family, friends, and my girlfriend. Sacrifices had to be made.

2,500 miles from home, a different country, and a coast that I’ve never lived on.  All my sacrifices up to this point have landed me at the best prep school in all of Canada. In terms of talent pool, facilities, and our dynamic staff, I couldn’t have landed a more fitting job, and it came at the most fitting time in my career. We have a special thing going on up here and to be in the mix of Canadian basketball, has been a bigger blessing than I ever thought it would be. In my time here, Tony has taught me valuable lessons and has given me some great stories and background about Canadian basketball, which are things that will stick with me for the rest of my career.  Due to Canadian basketball not taking off until the late 90s, Tony is considered one of the Godfathers of grassroots basketball in Canada. He founded the “Bounce” basketball AAU program, that then became CIA Bounce, and is now NIKE Bounce. Bounce produced his two sons, Tyler and Dylan Ennis, as well as back-to-back number one draft picks, Anthony Bennett and Andrew Wiggins. The knowledge and relationships that I’m gaining will allow me the ability to recruit here for the duration of my career. I was blessed to work for somebody that I share values with, and also conducts his business in the same manner that we did at the University of Washington. He just gets it.

Working for visionaries such as Dave Benezra, Mike Hopkins, and Tony McIntyre, has been a blessing.  God places the people in your life that you need and I’m grateful every day. Your level of sacrifice should match the value of which the very thing you’re in pursuit of, calls for.  The pursuit of what I want has driven me to Toronto, Canada, and I wouldn’t have it any other way. I have been given the chance to live in another country and see an overall different style of living, while being forced to grow in my discomfort and it’s been great. I was given my own development team to head coach, in one of the best prep leagues in North America (Ontario Scholastic Basketball Association). Sitting in a head coaching seat and getting those reps, has been invaluable for me and my own cognizance.

To my fellow young coaches, I’ve quickly seen and found that there’s no “Plan A, Plan B, or Plan C” in order to get the job you want, or at the level you want it.  Be a person with high integrity, be present in the job you currently have, and be intentional and genuine with the relationships you build. You should want quality over quantity. Be confident in your work, believe in yourself, and understand that there is value in sacrifice.  When I played for Coach Benezra when I was in high school, the theme of our team was “Culture of Sacrifice.” I’m glad that God places the virtue of sacrifice on my heart in the manner that he does. It has made my journey a bit easier and a lot more pleasurable, because in this business, we know nothing is guaranteed.

10 thoughts on “LEVEL OF SACRIFICE by Jeremy Pope”