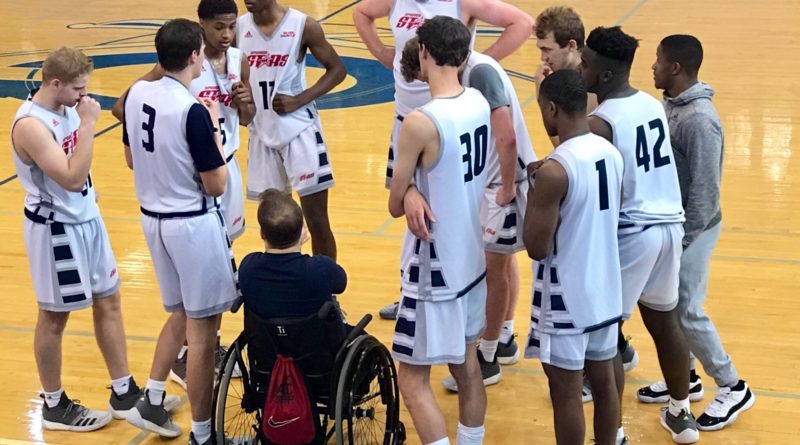 It was November of 2004 and football season had just ended at Greer High School.

Growing up, I always played sports and did everything the other kids my age did. This continued into middle school, where I played baseball and C-Team football. Once I got to high school, the size gap was a little too much to where I could play so I did the next best thing, I became a manager. Football was my favorite sport at the time and I was looking for something to bridge the gap between the end of the season and spring practice.

I approached the high school coach, Jeff Neely, and told him that I would be at the next practice and I was going to be his manager. I didn’t really give him a choice.

For the next 4 years, I served as the manager of the varsity basketball team. I even gave up football and focused on basketball.

Senior year approached fast and it was time for me to start thinking about college. I knew I wanted to be involved in basketball at the next level.

My eyes were set on a high major program in state. That is all I wanted to do.

One day during the spring, former Anderson (SC) head coach, Jason Taylor came to our high school to watch a prospective recruit work out. I ran the entire workout and as the story would go, Coach Taylor left that day telling my high school coach he wanted me to be his manager.

I would be an Anderson Trojan.

In my four and a half years at Anderson, I learned more about basketball, life, and myself.

In between three consecutive NCAA tournament appearances, including an Elite Eight and a Sweet Sixteen, Coach Taylor became one of the biggest influencers in shaping my coaching career. Not only did I learn how to guard ball screens, attack a zone, breakdown an opponent’s tendencies, etc., I learned how to teach those things. There is a big difference between knowing and teaching.

But the biggest lessons often happened off the court.

Coach Taylor was a huge fan of Coach Don Meyer (who wouldn’t be).

Our practices and meetings were often filled with Coach Meyer quotes. One practice Coach Taylor started practice with this quote, “Be who you is cause if you is who you ain’t, you ain’t who you is.”

I have always believed that God made me like I am for a reason and that he doesn’t make mistakes. Psalm 139 states that I am fearfully and wonderfully made and that God knew what my life would look like long before the beginning of time.

Being a little person and a basketball coach seems like it would be an oxymoron. How am I going to teach players to play a game that I had never played past Saturday morning church league growing up.

It would be easy to get away from who I am and become someone that I am not to more impress a coach to hire me or impress a player to believe what I was telling him. But then I wouldn’t be who I is.

Even now, after a serious spinal surgery that has me, for the foreseeable future at least, relying on a wheelchair it would be easy to go take up another profession and work behind a desk. But then I wouldn’t be who I is.

Who I is is a little person that has a passion for impacting young people and seeing them use the game of basketball to become better players and young men all to make Jesus famous in me. I am meant to be on a basketball court and that is where you will find me.

Nobody has gotten to where they are without some people taking a chance on them or believing in them before results can be seen. Jeff Neely gave me my first shot around the sport. Jason Taylor and staff shaped me at Anderson. Gus Hauser, Jay Reid, and Joey Cantafio all have that no result belief in me. Mike Young, Ed Conroy, Dan Ficke, Bryan Lentz have all given me chances to work camp which have allowed me to meet a lot of the coaches I know today. AW Hamilton and Lee Martin gave me a chance when nobody else would. Jay Williams taught me life is not an accident and was one of the biggest supporters to help me be able to have surgery.

That is who I is, do you know who you is?

David Bentley is a rising basketball coach. He attended Anderson University in South Carolina where he assisted in three straight D2 NCAA Tournament appearances, an Elite 8, a Sweet 16 and an SAC regular season title. He has worked camps across the country and also has experience as an Assistant Coach at Hargrave Military Academy and as a Head Coach with the Upward Stars AAU program based in South Carolina. You can follow coach Bentley on twitter: @davbentley

One thought on “BE WHO YOU IS by David Bentley”