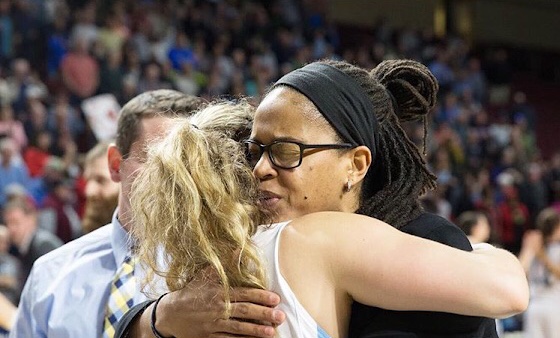 I always tell myself that I’m less of a coach and more of a gardener or harvester of talent. I find that players are so malleable, and as coaches, we have the power to speak success, positivity, and greatness into their lives, on and off the court – if we take the chance to do so.

When I was in college, my coach Kim Mulkey used to always tell me that I would be a coach one day, but I didn’t really pay it any mind. I was studying communication and criminal justice because I planned to play professionally for as long as I could, and then maybe enter law enforcement. Hearing her say that I would be a coach was always interesting to me; because although I loved the game of basketball, I’d never considered coaching.

I have had teammates who liked basketball a lot and competed at a very high level.I once had a teammate who just had the GIFT, she had the most beautiful game I have EVER witnessed, I used to WISH I had the skill set she had. Although I worked at my game everyday & hoped and prayed I could have some of the skills she had I realized that my advantage was different & we competed at the same level because we both bought something special to the table. It was CLEAR to me that what she brought to the table was a silky, smooth game with a beautiful shot & almost effortless skillset. I eventually realized that what I did have, was an absolute love for the game! Enough love to study the game, watch it in my own time, study statistics, study offenses, and opponents tendencies. At the time I didn’t know that was basically what coaches did, I just knew that’s what I had to do to keep up with the players as gifted as my silky smooth teammate, Jessica Morrow.

Today I’m so thankful that Coach Mulkey and Jennifer Roberts spoke college coaching into my life. They planted those seeds, and today I’m a collegiate basketball coach. That reminds me that every day I have the opportunity to speak greatness into the lives of my players. Some of them I think will be coaches one day; I will make sure I verbalize that to them. Some won’t be coaches, but they all have so much potential. It’s my job to plant the seed of success and prosperity into their lives. You never know which of those seeds will grow and turn into beautiful flowers. I take responsibility for the fact that what I tell them may impact their future, which may, in turn, impact the lives of millions of others.

When coach Mulkey told me that I would coach one day, she had no clue that she was not only coaching me but is also now helping coach my players at the University of Maine through the basketball I learned from her. So, make sure that you are taking responsibility for your voice as a coach and for your opportunity to impact the next generation beyond what you can ever imagine.

“You don’t have to influence thousands of lives to make a difference. Maybe you’re called to influence ONE life that will impact MILLIONS.” – Draw the Circle, Mark Batterson

Jhasmin Player is an Assistant Coach at the University of Kansas. Prior to Kansas she served as assistant coach at Loyola Marymount under Head Coach Charity Elliott. After a stellar playing career under Kim Mulkey at Baylor University, coach Player spent the 2009 and 2010 seasons playing professionally overseas. She joined the coaching staff at Maine in 2011 and spent two seasons as an assistant. After a second professional stint in Europe, Player then returned to Maine for a second stint as assistant coach and recruiting coordinator under Head Coach Amy Vachon. Jhasmin is a person of many talents and has gained some notoriety for her very thoughtful video posts on social media. You can follow Coach Player on Twitter and instagram: @ThePLAYERway.

9 thoughts on “WHAT YOU SOW by Jhasmin Player”