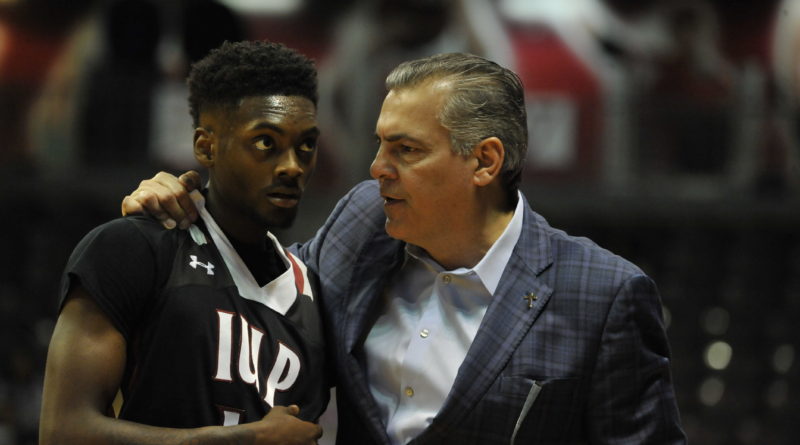 It has been a consuming lifestyle at times, but if you LOVE the process, it never feels like work. If it doesn’t consume your time, it will consume your mind. I was probably thinking about a recruit when I thanked my wife for 28 great years of marriage, although we had been married for 29. I guess there was one year that was just very good and not great.

I committed to sharing some of my experiences and insights when I ran into Rob Lanier during a recruiting period in Las Vegas last July. RELATIONSHIPS. Ever since our days working together as assistants at St. Bonaventure in the mid-1990s, I have found Rob very persuasive. I was fortunate to be in the same foxhole – some would say igloo – with Rob for five years. In that period, we were able to overcome some strong odds to achieve a level of success that Bonaventure hadn’t experienced in 25 years. While Rob was recruiting a lot of talented players, Jim Baron‘s ability to lead is what made the difference. Jim’s greatest coaching strength was his power of belief. He was convinced, as an alum, that Bona’s was the greatest place on earth – even though there were only two seasons, winter and spring in July. Jim was able to get his assistants and enough good players to buy in. It was hard to believe that anyone had a greater LOVE for their alma mater. I think they threw in a tombstone and plot on campus to sweeten the deal on his last contract. Our success there was a direct result of his unwavering belief and his ability to get back up and overcome the odds. Thank you, Jim!

I was blessed to get an opportunity to start my career as a graduate assistant at Ohio University with Danny Nee. That staff had one of the all-time high-energy guys in Billy Hahn and a relentless young coach in Fran Fraschilla. Fran has been undefeated working for ESPN the last 10 years. I learned that intense high energy and relentlessness can give you a good foundation for success in this business. I should have paid to learn from those guys. I got some lessons that were priceless. It was much appreciated. Thanks, Danny!

In 2001, after five years at St. Francis in Loretto, Pa., and nine years at St. Bonaventure in Olean, N.Y., I finally got out of the federal witness protection program and moved to work at LaSalle University in Philadelphia with my mentor and friend Billy Hahn. I went from working on two of the more isolated campuses in the country to two great years coaching in a town that is the mecca of college basketball. Billy showed me, as well as his players, an unbelievable passion and LOVE for the game. After 20 years in the business, I know I got better as a coach from that experience. Coach from your heart! Live from your heart! We are in the people business, and God blesses us every day that someone calls us Coach. Thanks, Billy!

Like most young assistants, I had the ambition to coach at the highest level, so when Jamie Dixon got the job at the University of Pittsburgh and asked me to join his staff I traveled across the Pennsylvania Turnpike to a program that had Top Ten status at that time. It was a dream come true for a kid from Sharon, a small town just 60 minutes north of Pitt’s campus. Sometimes you need a lot of patience, but hard work, focusing on being great at your own role, and good fortune can get you where want to go. Jamie was great with fundamentals and details. His work ethic is second to none. There is always opportunity to learn, and I’m grateful for those three great years. I am also grateful for not getting hit by the can of soda that was thrown across the room at halftime of an NCAA Sweet 16 Tournament game. I don’t recall who on the coaching staff threw it, but you can’t take things personally, just as we tell our players on defense, “Keep your head on a swivel.” Thanks, Jamie!

After three years at Pitt, I left to become the head coach at Indiana University of Pennsylvania. IUP is a great Division II job, and I was at the point that I wanted to lead my own program, build my own culture and coach ball. I remember Jeff Goodman saying to me, “Joe, you can win there and get a Division I job in a few years.” I appreciated his confidence in me, but that wasn’t the plan.

What I learned from all these stops and all these men that influenced my life is that happiness is where your feet are. I admire and respect the many great coaches in our profession that give every breath to their programs. I’m just thankful and content being off the main highway of college basketball and still experiencing the joy of coaching and impacting the lives of young men. RELATIONSHIPS!

In 2010, we had a senior on our team named Tom Young. His mother, Phyllis, was a Philadelphia police officer. She did a great job as a single parent. After we lost in the national championship game, Phyllis hugged me and said, “Thanks, Coach. I gave you a boy and you gave me back a man.” The wins don’t get any bigger than that! Unless you get the opportunity to coach both of your own sons. My oldest, Dom, sat behind an All-American for three years, and fortunately the separation in talent was large enough that even mom never asked, “Why don’t you play Dom?” If you want to coach your sons and stay married, make sure they are clearly not as good as the guys ahead of them, or clearly better. I’m pleased that Dom has gotten into the family business and is enjoying his journey as a college coach. Dom is currently an assistant at Morehead State University. Fortunately, Dante, my youngest, was a first team all-league player on a 28-win team as a sophomore. I got a lot more hugs from my wife that year.

Joe Lombardi is a true veteran of the coaching profession. He began as a Graduate Assistant under Danny Nee in 1981-82 and has since made Assistant coaching stops at Youngstown State, Indiana (PA), St Francis (PA), St Bonaventure, LaSalle and Pittsburgh. In 2006 he was named the Head Coach at Indiana, PA (IUP) where he has lead that program to enormous success. IUP has made 8 NCAA Appearances, captured 3 PSAC Tournament Titles, 2 Atlantic Region Titles and 2 NCAA Division II National Championship Appearances.

One thought on “RELATIONSHIPS by Joe Lombardi”